We had been recommended Raggamuffin Tours by people far and wide so we booked ourselves in to a half day snorkling tour.

We started the day at the tarpon viewing platform. Swimming round a little wooden jetty are two dozen huge fish, around one metre long. It’s then we were informed that these were all babies! We both held out a sardine* over the side of the jetty where they were suddenly snatched out of our hands by these monster babies jumping out the water!

*they called them sardines but they were just small local fish The boat ride out took about 1hr so everyone on the tour shared some fresh fruit and we got chatting with some Irish girls. One of them had friends from university in Dublin who grew up in Parsons Green. Small world! 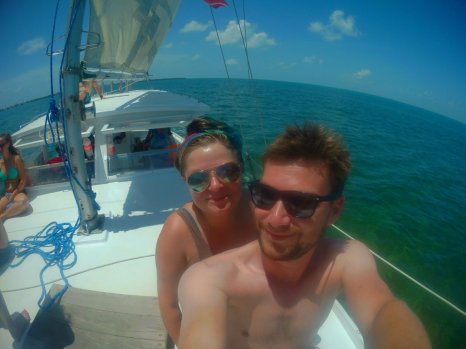 The captain had been given a tip off that morning so for the first stop went in search of manatees. Unfortunately I was struggling to get used to swimming in the sea with a snorkel, so despite having a life jacket on I was pretty distressed. The tour guides were amazing and helped me to get right above where a manatee was sleeping on the sea bed.

All of a sidden we all look over to the right and watch two giant but graceful beasts swim towards each other. They caressed and nuzzeled each other’s faces, going up to the surface and back down again. Then they slowly drifted away together, still holding each other’s faces with their flippers. It was the most serenely beautiful thing I have ever witnessed throuh a panic attack. 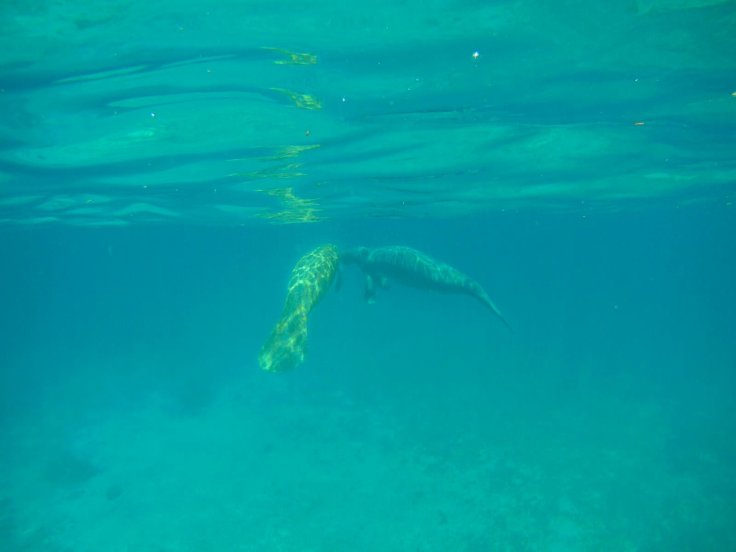 Next stop was the famous Shark Ray Alley. Matt went in with the others and swam with both nursing sharks and stingrays. I stayed on the boat and while I was taking photos of Matt about 20 sharks swam right passed me. 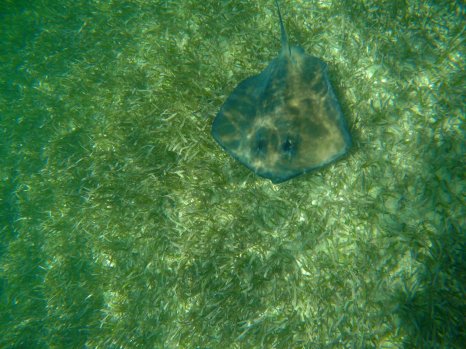 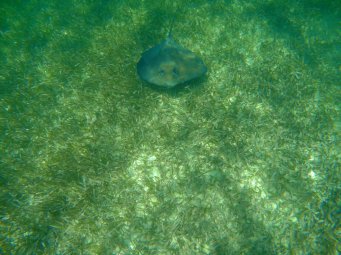 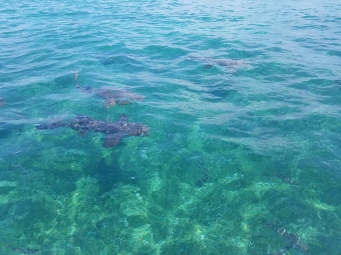 Then to the marine reserve. We were split into two groups and led by our tour guides towards the coral reef. There was so much life everywhere and we got to watch some colourful fish dart about, large scholes move together and even a Green Morray Eel popped his head out to say hello. The coral itself was varied and beautiful. Matt’s favourite where the ones that looked like brains while my favourite were the purple veiny ones.

After everyone was getting on really well and we had an impromptu party on the boat! Rum punch, body shots, dancing, people dive bombing off the roof into the sea.

Most of us met up later again in the local sports bar. We had a few beers, played the locals game where you swing a ring onto a hook, watched a band play (I got a shout out or being the only one who knew teenage dirtbag) and did a little dancing.

We slept well that night!

This is a text widget. The Text Widget allows you to add text or HTML to your sidebar. You can use a text widget to display text, links, images, HTML, or a combination of these. Edit them in the Widget section of the Customizer.